Our founder John Russell, recently penned a letter to investors sharing his thoughts on the Coronvirus where we now stand.  These are excerpts from that letter.

“There are some years when it takes days for things to happen,

There are also some days when years happen” 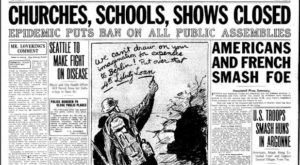 It seems like years ago when we started writing about the Corona Virus, but it’s actually only been about 30 days.

At that time, we understood little and unfortunately, we do not actually KNOW a whole lot more now, but have certainly heard an abundance of daily theories.  While most of the news has been consistently negative, perhaps the most sobering report came last week when President Trump announced that the models indicated a possible 100,000 to 240,000 American deaths from Covid-19.  Of course, millions of others will be infected, but will recover.

Grim indeed, but America has endured much worse.  During the Spanish Flu pandemic of 1918-1919, some 4% of the world’s population or about 45 million people died from Flu complications.  In America, it is estimated about 675,000 died.  At that time, there was limited health resources and even more limited knowledge about viruses.

But, strangely enough, they practiced some of the same regimens we are today: social distancing, quarantines, hand washing and lots of masks.  Schools, churches and public gatherings were closed for 4 weeks or so.  While that epidemic/pandemic was going on, World War I was still raging, and a substantial number of American troops were overseas.  Tough times indeed, but somehow, America and its people fought, planned and prayed day after day, until the pandemic was brought to bay by God’s grace.  And ultimately, our grandparents and parents survived this disaster to start businesses, farm, marry, raise children and leave behind some beautiful memories.  I believe that we will also survive and prosper by some of the same Grit and Grace that brought them through.

While we agree that the light currently seems dim, it also reminds us of our experience and feelings during:

The constant in all of these crises was that it was always darkest before the dawn, but when the sun rose, it rose quickly with life giving sunlight that gave birth to tremendous growth.

We truly believe this and act accordingly, because the old rejoinder, “I feel your pain” is ever so true with us at the Advisors Group. We take a very personal, pastoral approach towards you our clients and friends.  With us, it’s not about the money, but about you, your families, and your well-being and peace of mind that is our primary concern.

It would be so easy to just sit down, hold our heads and moan “shoulda, woulda, coulda”, but that would accomplish nothing and help no one.  So, from our perspective as financial planners, we are very busy trying to make lemonade out of lemons by integrating the numerous Tax, Financial and Retirement provisions of recent Executive and Congressional actions to the advantage of our clients, based on their individual circumstances.

A Walk Among the Trees:

As I have been mulling over all these thoughts, I had a random memory come to mind of something I once read, and which may be familiar to you:  Consider the Sequoia Trees that are spread over some 70 groves along the western slopes of the Sierra Nevada mountain range  that are among the largest trees on earth.  They grow some 100-300 feet tall and 20-30 feet in diameter.  More astounding is the longevity with the oldest known to be some 3500 years old.  Due to the relative scarcity of these awesome giants of nature, for the last several decades there was a strong policy set in place to protect them from forest fires.  Strangely, during that period it was found that very few new sequoias sprouted and even fewer survived.  It was only after a spate of uncontrollable forest fires ravaged some of the groves that a new revelation came to light.  The sequoia tree was actually somewhat dependent upon forest fires to survive!!

The sequoia is a coniferous redwood tree that matures very slowly, usually not producing cones until over 12 years old.  Even though the seeds in the cones take some 2 years to mature, they remain as green cones for sometimes 20 years.  As the seeds eventually disperse, its been found they rarely survive due to competing shade trees and plants that prevent the full sun and rich soil they require.  The revelation from the forest fires was that the fires ravaged the surrounding areas, consuming accumulated debris, competing plant life and low hanging branches.  The tremendous heat generated by the fires caused the cones to open and slowly disperse the seeds across the area as the ground cooled.

The seeds found fresh soil enriched by the ashes and abundant sun for sustained growth and species regeneration.  What about fire damage to the old trees?  Seems that the mature trees have a very fibrous bark that can be up to 3 ft thick as well as a tannic sap to minimize fire damage.

Moral of the Story:

Even as the long-living giant sequoia trees require a periodic forest fire to set up conditions for their growth and survival, the stock market also requires periodic crashes to clean out the debris of old irrelevant and dying companies, as well as non-efficient or over-populated new ones.  While painful in the process and at times catastrophic, it frees up investment capital for new innovative companies to flourish and the older surviving companies to refurbish and refocus.

So, that about sums up my thoughts following a long week and longer month.  I am looking forward to the end of this particular series of fires, as our crisis start to cool down, and then seeing the promise of the new green shoots to come.