Because You Asked: Should I Consider Refinancing My Mortgage Now?

That is a really good question and one that we have evaluated for several clients.  While low-interest rates are a cause for some pain as an investment, e.g., a 10-year Treasury yielding a “whopping” 0.584 today, it is also true that consumer loan rates are also at historic lows. Just for context, I searched for some historic data that covered the trends in home loans, and found the following chart: 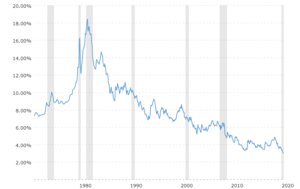 The link to the chart can be found here: https://www.macrotrends.net/2604/30-year-fixed-mortgage-rate-chart

What is rather astonishing is that in 1981, interest rates on a 30-year fixed mortgage had gradually risen to 18.44%, and has more or less steadily declined in the ensuing 40 years until today.  So how would today’s rates translate into savings?

Generally, we are proponents of using cheap interest rates over longer periods of time (such as a 30-year mortgage), believing that the gains from investments more than make up for the difference compared to paying off debt early. That means that more of your money is working to make you money, rather than paying off debt.

However, given the current dramatically lower interest rates, we are looking at some additional factors and thought we would share some of those thoughts with you.

An Example to Consider:

Consider a couple currently holding a 30-year mortgage with an interest rate of 3.75%.  They have paid on it for five years, and have an outstanding balance of $300,000 due.  They are exploring refinancing, have excellent credit, and received the following quotes:

We are estimating that new loan costs would be approximately $5,000 out of pocket, so we started the analysis by applying that $5,000 to the current note with an interest rate of 3.75%.  The remaining interest they would pay this original note over the 25- year period would amount to $160,007.

Most are aware that in the early years of a loan, you are paying primarily interest on the note, and that only a small percentage gets applied to the principal.  However, by reducing the term, you are obviously increasing your principal or equity much, much sooner, and thus realizing the reduction in the amount of interest paid.

What About Adding to the Principal of my Current Loan?

What about the “opportunity cost”?

What we mean by opportunity cost is what the money you are spending could be earning if invested.

Consider a couple with moderate risk tolerance, and a diversified portfolio returning between 6.5 and 7%.  Take that $450 per month (the difference between current P&I and projected P&I with the 15-year note) x 12 months = $5,400 per year.

While that is a great result for investing, of course, the return on investment is not a guarantee.  And if you compare it to the $106,262 you would be saving in interest payments, guaranteed, the answer becomes much more obvious.  You would save about 21% by selecting the 15-year note.

We hope that this little illustration helps to encourage you to do your own exploration of the potential benefits of these amazing and historic low interest rates.