Because You Asked: How Will This Election Affect My Investments?

How Will Our Investments be Affected by the Election?

Now just 75 days from today or on November 3, 2020, many of our citizens will cast their ballots to elect our President for the next four years. In election years such as this, especially when we are electing a President, we tend to hear a frequent question: “How will our investments be affected if _____________ (insert the candidate name or opposing party of concern) gets elected?”.  And our answer for years has been something along the lines of :

“Surprisingly, it does not matter all that much.”  Also, surprisingly for many is that despite conventional wisdom, stock market performance under Democratic Presidents has generally been better than under Republican Presidents- not all of them, of course, but continue reading before reacting to that statement.

What Are the Stock Market Returns During Each President’s Term?

We have done the research ourselves and developed a chart using S&P 500 returns to measure stock market performance during each President’s term of office, but the folks at Bespoke Premium Charts came up with a nicer-looking chart that we wanted to share with you.  Theirs is based solely upon Dow Jones (DJIA) returns going back to the first Roosevelt at the start of the century. 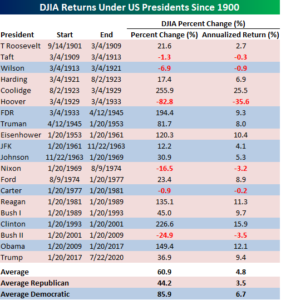 You will notice that the metrics are drawn from day one of each President’s inauguration, and ends in most cases on the inauguration day of their successor, with a few notable exceptions. Are you shocked by these results?  We can all look at these figures and recall historical events that probably affected the market’s performance in particular years, but these are the actual figures.  For the disbelievers, we encourage you to do your own research if you wish: you can go to Yahoo.com and select the finance tab, select the index you want to research and then select “Historical Data”, which allows you to select the dates you desire.  Here is the link to another interactive chart you can play with: https://www.macrotrends.net/2481/stock-market-performance-by-president

Wait…What Was the Point?

While we are presenting these facts for your review, they are sort of beside the point.  What is the point?  While our President is arguably the most powerful individual in our government structure and despite common perception, the office of the President does not control the stock market and investment performance.  The folks at Bespoke may have said it best when they stated: “Presidents deal with the hand they are dealt rather than act as the dealer themselves.”

Perhaps we should ask ourselves why this premise that the President does not control the stock market would be true? At times the President’s “hand” includes situations like 9/11, pandemics, natural disasters, and so on, which will impact the economy and markets, but of course, he (or she) does not control these situations either.  In essence, though, it is more the idea that companies that make up the stock market in all of its various forms are neither owned nor governed by the President or any other politician.  Presidents and politicians can make policies and pass laws governing certain operations and functions within our economy, such as tax policy, which can affect corporation or company profits.  But our companies and corporations are owned and operated by individuals or in conjunction with independent Boards of Directors, who along with their CEOs and other employees, are hired to run them.  And if they do not do well, or make a series of poor decisions, they can be fired and replaced by someone else.  And whoever the President happens to be is irrelevant to these business decisions.

Hence, researching strong, well-run companies and funds, developing a diversified portfolio, and engaging in disciplined investing for the long term lends itself to successful and profitable returns over time.  And in the background, we observe and hopefully all participate in the democratic elections that move our country forward, knowing that regardless of who wins, our economy will keep chugging along, doing what we do.